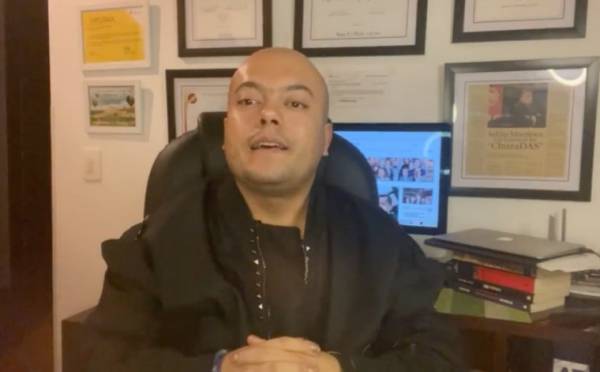 Two armed men attacked the bodyguard and vehicle of award-winning investigative reporter Julián Martínez in Bogotá while he was interviewing a subject on February 22, 2022. (Julián Martínez)
Por COMMITTEE TO PROTECT JOURNALISTS

At about 11 p.m. on February 22, two men with pistols approached the journalist’s vehicle, which was parked on the street in front of a Bogotá apartment where Martínez was conducting an interview, according to news reports and a CPJ messaging app interview with Martínez. Martínez said the gunmen tried to force open the locked vehicle and pointed their pistols at his bodyguard, who was in the driver’s seat. The bodyguard fired several pistol shots at the men, who were unhurt and escaped in a waiting taxi.

Martínez, an award-winning reporter for the independent Bogotá-based La Nueva Prensa news website, frequently investigates allegations of government corruption and illegal spying. Due to numerous threats against him, the Colombian government’s National Protection Unit has provided Martínez with an armored vehicle, protective vest, and armed escorts since April 2021, he told CPJ.

“Colombian authorities should thoroughly investigate the armed attack on the vehicle and bodyguard of journalist Julián Martínez, hold the perpetrators to account, and continue to guarantee his safety,” said Natalie Southwick, CPJ’s Latin America and the Caribbean program coordinator, in New York. “When dealing with an attack on a journalist like Martínez, who covers sensitive information and has received credible threats, it is essential for authorities investigating the incident to consider that he may have been targeted for his work.”

Martínez is currently investigating alleged links between Colombian politicians and drug traffickers and told CPJ he believes the gunmen may have been trying to frighten or kill him. “Maybe they thought I was inside the vehicle,” Martínez said, adding that he reported the attack to a Bogotá unit of the Attorney General’s office. “They may have been trying to intimidate me or promote self-censorship.”

Major Gen. Eliécer Camacho, the Bogotá police commander, said the motive for the crime is unclear. “We haven’t ruled out that it was a robbery attempt,” Camacho said in a February 23 video posted on Twitter. “For us, it is extremely important to determine the motive of these delinquents.”

CPJ sent text messages to National Police spokesman Wilson Baquero, who did not immediately reply, and to Paola Tovar, spokeswoman for the Attorney General’s office, who said the case remains under investigation.

In a February 23 article in La Nueva Prensa, editor Gonzalo Guillén said the incident was one of 19 cases in the past three years of attacks, aggression, or harassment against the news outlet and its journalists.